Well, they do say that time flies when you’re having fun – sadly we at the end of another term of pottery class. There won’t be any more lessons until September….what is a girl to do!

I had enthusiastically embarked on a large number of projects this term, and only on the final lesson did it dawn on me that I had a lot of painting and glazing to do. The lesson was absolutely frantic, but somehow I just managed to finish my items in time!

Firstly, I have made two bowls using different techniques. I used a mould to produce a thin, fragile hexagonal bowl, and then used underglazes to paint a big, oily blue button in the middle. With underglazes, the whole item needs dipping in transparent glaze after painting, to seal the colours. This means that the lines are sharper and the colours don’t bleed. Far more precise! I’m really happy with how it turned out. 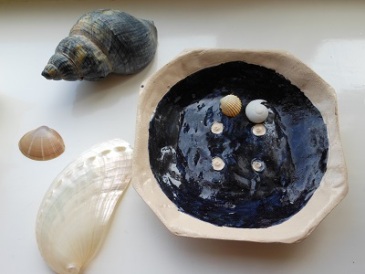 I also made a flower bowl, by rolling out an oval slab, and then alternately pinching inward and outward creases to give me a pleated edge. I had to make this thicker than the button bowl, in order for the structure to have strength. I was unsure how to proceed from here! To me, the shape was quite Middle Eastern in its design, but also suggested to me a flower shape.

If I was to paint it in a Middle Eastern style, I think the process would have demanded more skill than I currently have! Therefore I went for the easy option and painted a flower. I mixed a raspberry pink, a corally, tangeriney colour and a pinkish lilac for the petals, but sadly the orange and pink have turned out more similar than I would have liked. It was painted with standard glazes, to give the finished piece a glossy look, and to allow the colours to blur slightly between the shapes.

I painted the outside of the bowl in an apple green, but wish I had expanded on this theme and really defined leaves on the outside. I’m happy with the finished item, given the rush to get it into the kiln by the end of the lesson, but I may revisit this project next term and try to use the ideas to make a second bowl, that I spend a little more time and effort on! 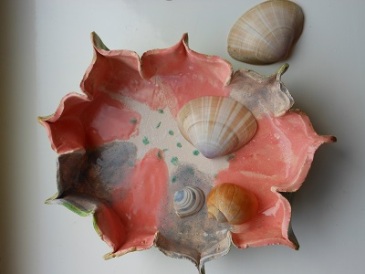 Finally, I made 2 ornaments for my lovely little flat. As you will see from the pictures below, I have an aloe plant. Or, to be more specific, I think the aloe plant has me! It’s absolutely enormous and has grown out of all proportion, to the point where I can no longer lift it. I love my aloe!

Aloe was originally given to me as a gift from my brother’s lovely girlfriend, Kate. Aloes often have off-shoots, baby aloes, so you’ve always got a new plant to share. As you will see in the picture, another one of the off-shoots is currently basking on the window ledge, hopefully waiting for a new owner – I’ve run out of people to donate them to!

I have become really rather attached to Aloe, who also doubles as my Christmas tree during the winter months. I felt like honouring him with his very own ornament, which thankfully won’t need watering at quite such an alarming rate.

My last ornament was for my bedroom, which is decorated with a variety of images from strong women from mythology and theology. I’ve got Diana, the hunter; the goddesses Athena and Nike; and a postcard of a Botticelli painting of the Madonna and child. I love Egyptian mythology, so I decided to complete my room with a simple wall hanging of Ma’at’s feather.

Ma’at was the wife of Thoth, and shares many of his attributes. She is the goddess of truth, justice, law and order. Think of her as an ancient version on the statue of Justice, atop the Old Bailey in London. Ma’at was really smart and knowledgeable, but her main role was in assessing mortals’ suitability for the afterlife.

Upon death, Ma’at would weigh the dead person’s soul (ka) against the weight of her feather. If the soul was lighter than a feather, then the person would progress to the afterlife. If not, the goddess Ammit would devour the soul. Pretty heavy stuff for a bedroom, you would think! However, what Ma’at teaches us is that you must life in a way that ensures your soul is lighter than a feather. To me, this means that I should try and live a moral life, do ‘the right thing’ wherever possible, and help others.

I also think it means that I should not allow my soul to be weighed down with worries, anxiety, regret. I wanted this on my wall so that every night, before bed, I can ensure I am relaxed, carefree, and my soul is lighter than a feather at the end of a long day.

This was super easy to make, simply by rolling a slab out and cutting the shape, and then painting with underglazes. I made the feather so thin that it was very fragile, and broke in half after coming out of the kiln. However, after painting it, the break isn’t noticeable. My favourite thing about this feather is…..it means my bedroom is now finished! A single room in my flat is now completely redecorated! Well, that’s only taken 14 months, now I must work on the remaining 5 rooms!