My upholstery project is really starting to take shape now. The wood has been stripped, painted and varnished, the fabric has been strip-quilted and cut to size, and now I suppose it’s time to start putting the thing back together!

I trawled the internet and found lots of super-helpful tutorials for diamond- or deep-tufting. Of course, this project would be a bit different, as the diamond pattern was already imprinted on the foam, so I didn’t need to prepare the surface. Also I couldn’t neatly finish the edges by folding the fabric over at the top, as the foam was already firmly attached to the wood. However, I could get to the back of it quite easily!

Some of the tutorials tied the buttons from the back, and some from the front. I found this blog by Adventures in Dressmaking one of the easiest to understand, so I began by trying the front-tying button arrangement. To stop the threads pulling back through, I looped them around small rolls of hessian on the back of the chair. 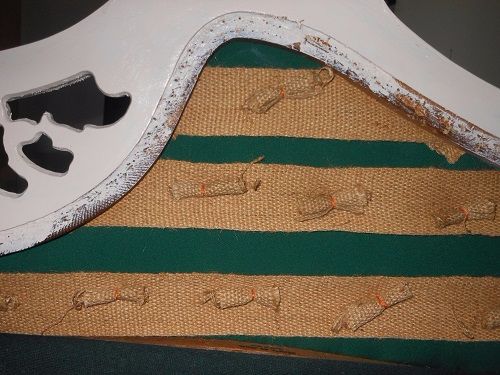 Prior to cutting the fabric, I spent an unhealthy amount of time deciding on whether to have vertical stripes, horizontal stripes, or a mixture of both. I then had to work out what colour each of the buttons would be, based on where they were positioned on the fabric. I hadn’t covered the buttons yet, and I was simply too excited to wait, so I first practised my skills using the old buttons, until I was happy with how the fabric was fitting.

Following the advice from the tutorials I found, I began in the middle of the material and systematically worked the fabric into the diamonds towards the edges. At this point I still didn’t staple the edges down, as I wanted to be sure that the buttons were firmly placed before pulling the fabric taut. I tried wherever possible to ensure that the folds all faced downwards, so that the finished effect was neat and uniform. However, I encountered endless problems due to the fact I had strip quilted so many different types and textures of fabric. Some refused to fold, and some warped and stretched out of all proportion when buttoned. It was really tough! Note to self: use easier-to-handle materials next time! 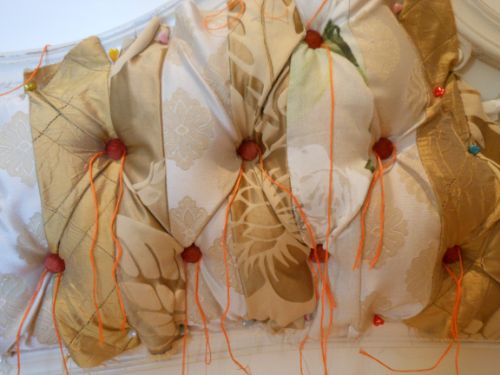 Another problem I faced was also caused by the strip quilting – it meant that I had to check and double check that the fabric was perfectly straight all of the time, so that the stripes stayed completely vertical. I’m sure for a skilled, experienced upholsterer, this would have been no trouble at all. However I was a total novice when I tried this, and can see nothing but errors and faults in the finished tufting! Another note to self: practice on a lovely, large-repeat floral next time!

I have absolutely no idea why, but I found covering the buttons one of the hardest parts of this project! And here was me thinking I was just getting the hang of this crafting lark (ha). I worked out which colours of fabric I would need, to coordinate with where the buttons would lie on the material. I cut small discs of material out, after fashioning a template out of a blue post-it note. I then stitched a running stitch around the edge of the fabric disc, so I could gather it up around the button.

Once the button top was covered, I trimmed any excess fabric and firmly pressed the back on, until the button was secure. Partly my troubles were caused by each of the different materials being of different weights and thicknesses, which meant that some of the buttons refused to snap shut. Also, I find working with little items like this supremely fiddly and frustrating! 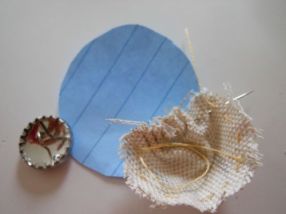 Utilising my ever-depleting reserves of patience, I eventually managed to cover all 14 buttons, much to my relief, so I could get on with the tufting again. I replaced the old buttons with the newly covered buttons, and tightened the threads to finish the look. Some of the finer fabrics in the patchwork had loosened, whilst the more traditional furnishings fabrics had kept their shape. Therefore, I tried my best to adjust the new buttons to return the tufting to a neat, uniform look.

Again, at this point I encountered a few additional difficulties – some of the threads snapped as I tightened the knots. Undeterred, I simply laced them back up with new threads and tried again. Some of the tutorials I had seen had recommended a back-tying method, and I thought that I might be able to pull the buttons tighter this way. Therefore, I replaced the snapped knots with back-tied knots, which made it much easier to firmly fix the buttons. Actually, it felt awfully like tightening a corset! 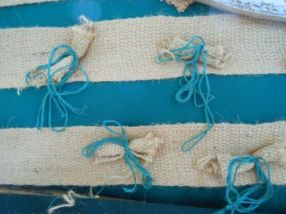 Anyway, withstanding trial and tribulation, I eventually finished my tufting to a reasonable standard. I was finally able to staple the edges of the material down and begin the seemingly endless work of hammering upholstery tacks along the seams. I found the tufting element of the project quite enjoyable, and I realise now that the end really is in sight! Goldie is very nearly finished!