Readers of my blog will be aware that I recently went on a road trip through the Highlands and Islands of Scotland. In preparation for the adventure I decided to try my hand at making some shorts out of a remnant of stonewashed denim, which I had bought at Abakhan in Preston a few years ago. I chose a pattern for shorts with an option roll-up detail and buttoning on the outside of each leg.

The pattern I used was New Look 6873, which required one and three quarter yards of a 45″ fabric. I didn’t have quite enough on the denim off cut, so I looked through the pattern pieces to see if there were any internal parts to the garment which I could do in a contrasting fabric. I realised I would be able to do the insides of the pockets and waistband in another fabric, so I got to work.

This is definitely the most complicated design I have ever tried to sew before – there were were 10 different pieces to the pattern, which, when cut out, gave me 19 bits of fabric to construct together. I was a little apprehensive, thinking I’d bitten off more than I could chew, but I thought as long as I worked slowly and methodically, I’d be ok. Plus, I like sewing with denim, it’s strong and can’t really stretch or warp when sewing, so I decided to give it a shot.

I measured the quantity of denim I had, and it was a 1.5 yard square. I knew I’d need to a) be really sparing with the denim I had and b) Work out which parts of the pattern I could get away with doing in a contrasting fabric. I cut the fronts and backs of the shorts out and was almost out of material already! Granted, this was also partially because I decided to lengthen the shorts so that the finished result would be approximately kneelength. I would need to do the inside of the fly, the waistband and the pockets in another fabric. I had a small amount of denim left for the outer waistband, but there was not quite enough to cut all of it in the same grain direction as the main pieces. Therefore, I decided to cut all three parts of the waistband in the same direction: against the grain, as I thought this would look less noticeable than just one segment of the waistband being cut in a different direction.

If you don’t believe how sparing I was with the denim, look how much was left at the end of cutting! Barely enough for a back pocket!

I am slowly honing my pattern cutting skills. I have never previously worked out how to cut the triangles on the cut line neatly (the ones you use to match up the pieces at the right points). I watched a tutorial where the sewist cut snips into the pattern piece, rather than arrows away from the pattern piece. I thought this was much neater and still did the job. Plus, it meant I could cut the pieces closer together on my feeble scrap of material.

A determined rummage in my fabric stash revealed this gem: It’s ‘Ready, Set, Robot’ by Alexander Henry. It’s a quilting cotton print which I impulse bought years ago and have been too nervous to use for fear of wasting it. I decided the Robots’ time had come to be stitched into something amazing. Obviously, the cotton was not as tough as the denim, so I used a strong interface on the pocket segments before stitching. I tried, wherever possible, to match the pattern well, so that robots were peeking out and smiling wherever they were spotted.

…and just a few weeks after my first attempt at understitching , here I was using the skill again! This particular job was much easier on these seams, but it was great to know I’d learned a skill which was already coming in useful!

I have made skirts and dresses before, but never trousers or shorts. Therefore, it gradually dawned on me that I would need to make my first attempt at constructing a fly. Eek! After much comparing of my bought jeans, I slowly began to understand what to do. In my typical style, I had started this project before ensuring that I had all the required fixings and findings available. It was at this point I needed a zip, and rather than waiting to buy just the right one, I found a 20″ brass zip on red backing lying around in the craft room that I thought I would cut down to size once it was attached. I basted the fabric to the top of the zip and then, when I came to test the fastening, I realised that this would leave the surplus zip at the bottom of the fly, hanging over the crotch, instead of at the top, where I could cut it and secure it/conceal it in the waistband. I ended up having to unpick it and rebaste it to the bottom of the zip – hopefully this is not a mistake I will make again! 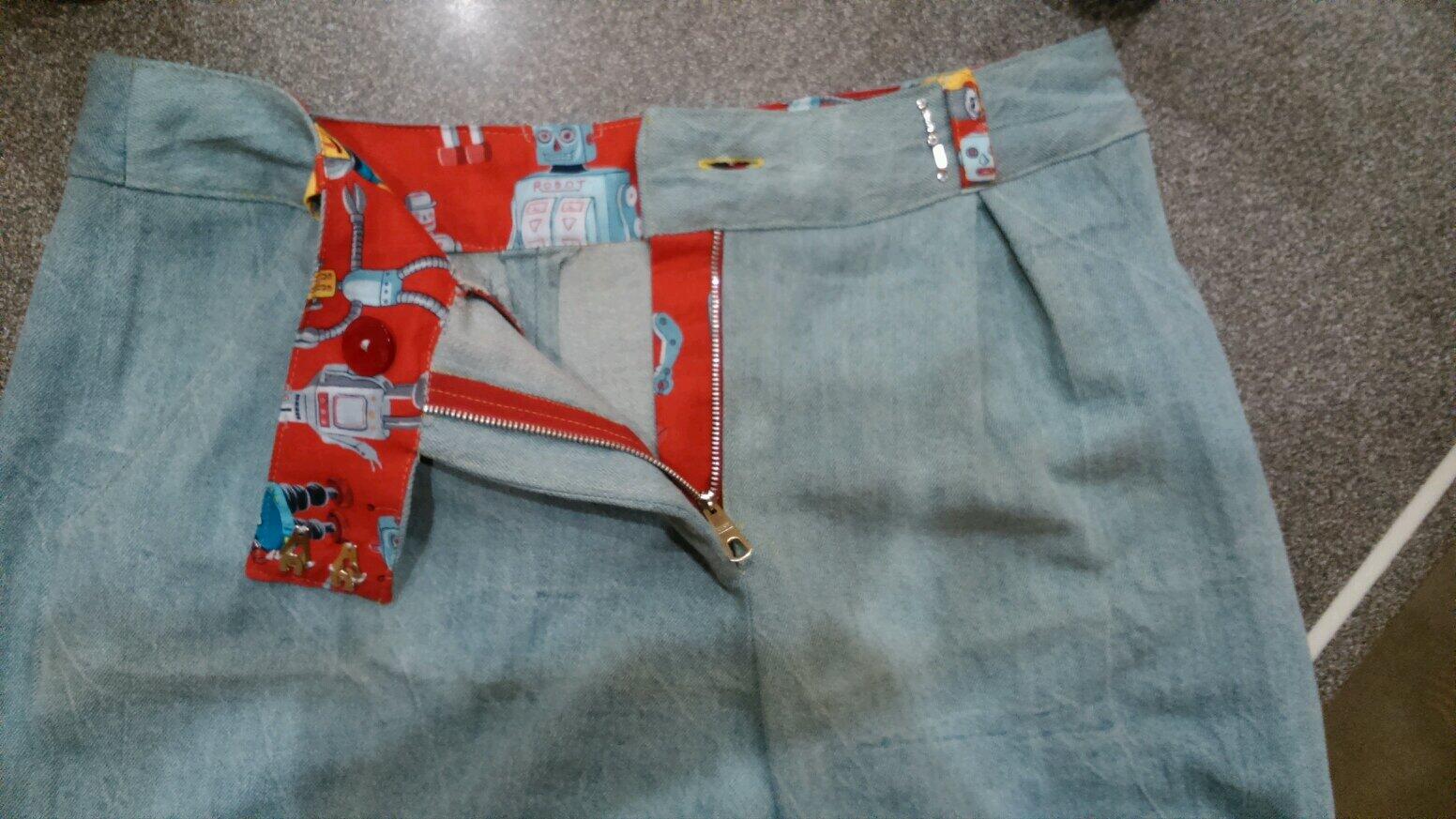 Once I had the front and back leg pieces assembled, I then stitched them together at the centre seam, front to back, and then stitched the legs. The project was going well, so I was feeling ambitious and, after being inspired by the dungaree challenge on the Sewing Bee, I decided to take a shot at flat-felled seams. I was nervous that my attempt would ruin the whole look of the garment, so I decided to stitch in neutral, cream thread rather than the bright yellow I had used on some of the understitching.

I stitched the side seams with wrong sides together, then trimmed the edge which faced onto the back sections of the shorts, and pressed the seam flat. I then carefully folded, pressed and pinned the untrimmed, front edge over the original seam, and stitched it as slowly as I could. They look pretty good actually! I also decided to flat fell the inside leg seam, as they also would be on show when the short legs were rolled up. However, for this one, the folded material was on the wrong side of the fabric, rather than the right side.

I think the flat-felling really neatens up the finished result, and it wasn’t that difficult. I’m sure my technique will improve, but this isn’t bad for a first attempt!

I basted the shorts together, but was a bit concerned as the pockets were overhanging the fly at the front. Did I do something wrong? I read and re-read the pattern, and checked some of the discussion on Sewing Pattern Review. No-one mentioned that specific problem, so I decided to trip the inside pocket edges and stitch them back up.

I finally got the waistband on, then tried the shorts on for the first time. The waist was sitting too high for my liking, and again, the waistband material was overhanging quite a lot. I realised that the problem may be that the pleats on the fronts of the shorts were too deep. A few sewists had reported this on Sewing Pattern Review, but I hadn’t understood what they meant until I got to this stage. I unpicked the waistband back to the front seams, and let each side of both seams out by a few mm. The pleats were rather deep  – perhaps I got them wrong in the first place! When letting the pleats out, I made sure to reposition the belt carriers so that they both still landed central to the pleats.ve I done something wrong? Once I had done this, the shorts fitted me perfectly. What’s more, the waistband was no longer overhanging excessively, and the pockets fell back on the inside. It made me realise that I probably hadn’t needed to trim them after all, as the problem was in the pleats all along! Oh well, at least that won’t be visible on the final garment.

On the picture above, you can see the belt carrier hanging down perfectly between the pleat, before being lifted up and stitched onto the waistband backing. The observant few may also be able to see the change in grain direction between the waist and the leg. The VERY observant might notice the neat top stitching on the pocket edge!

Time to face my fears: buttonholes. I took a deep breath, and wisely decided to test on other fabric first. Fortunately, I was home for the weekend, so Mummymau was on hand to guide me through the process. My sewing machine proudly declares itself to be capable of ‘”One Step” buttonholes. This is all well and good, if only you know what that step is! I turned the dial to the buttonhole setting, and attached the buttonhole foot.

It was a crazy contraption which had a slot for you to insert the button you were planning to use. This apparently enabled the machine to produce a buttonhole exactly one quarter inch longer than the button, resulting in a perfect finish. I couldn’t seem to master the stitching though, until I resorted to You Tube tutorials in a fit of desperation. Suddenly, the process seemed surprisingly straight forward, once I discovered the small lever at the back of the stitching plate of the machine!

I held my breath, positioned the test fabric, and applied pressure to the foot pedal…

And it worked!  I couldn’t believe it – a skill which had been a huge obstacle to me for a long time was easy peasy, and gave a wonderful, professional finish every time…

….as long as you always remember to turn the dial to ‘reset’ after each buttonhole.

Here is a picture of my first buttonhole. What a proud moment! I also had to make holes on the small button tabs on the sides of each leg.

With that final stitching, my awesome robot shorts were born. I am completely in love with finished result. They are eally comfy, hardwearing, and unique. They fit me perfectly (due to all the messing around with the front pleats) and I am certainly going to wear these to death. I had been toying with the idea of adding a back pocket to the shorts, which I eventually did after this picture was taken. As soon as I can find a willing volunteer, I’ll upload a photo of my handiwork :)

Your shorts turned out really great – love the robot fabric.

Thanks! I’ve enjoyed wearing them all Summer, I can’t wait to get them back out the wardrobe in Spring!